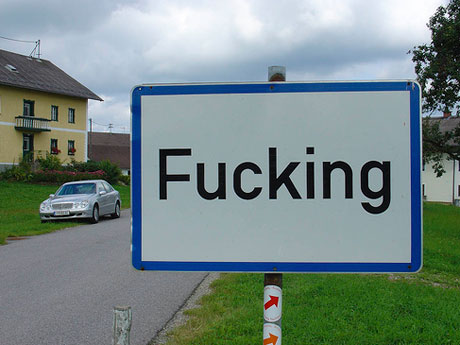 Talking about the name of beers, this is most likely the most bizarre beer out there!

Now to the story….

The savviest beer company ever has just won the right to call its new brew “Fucking Hell”—Fucking being a town in Austria, and Hell being a term for light ale. The mayor of Fucking—the mayor of Fucking—is presumably despondent for many reasons, and now, according to Der Spiegel (via Slate), he is upset because the new beer is likely to attract visitors, and therefore vandalism. “Twelve or 13 town signs have been stolen. We’ve taken to fixing them with concrete, welding and rivets,” he said, tragicomically.

The Trade Marks and Designs Registration Office of the European Union is taking this all very literally, which only makes it funnier. Said a statement: “The word combination claimed contains no semantic indication that could refer to a certain person or group of persons. Nor does it incite a particular act. It cannot even be understood as an instruction that the reader should go to hell.” A toast to Fucking Hell!